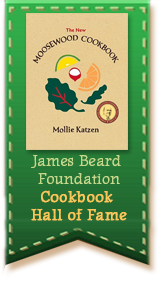 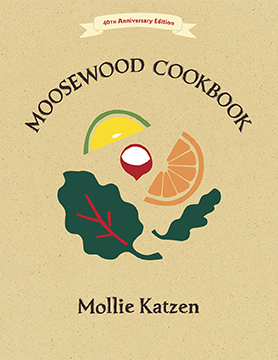 The Moosewood Cookbook has inspired generations to cook simple, healthy, and seasonal food. A classic listed as one of the top ten best-selling cookbooks of all time by the New York Times, this 40th anniversary edition of Mollie Katzen's seminal book will be a treasured addition to the cookbook libraries of fans young and old.

In 1974, Mollie Katzen hand-wrote, illustrated, and locally published a spiral-bound notebook of recipes for vegetarian dishes inspired by those she and fellow cooks served at their small restaurant co-op in Ithaca, NY. Several iterations and millions of copies later, the Moosewood Cookbook has become one of the most influential and beloved cookbooks of all time–listed by the New York Times as one of the best- selling cookbooks in history, inducted into the James Beard Award Cookbook Hall of Fame, and coined a Cookbook Classic by the International Association of Culinary Professionals. Mollie’s Moosewood Cookbook has inspired generations to fall in love with plant-based home cooking, and, on the fortieth anniversary of that initial booklet, continues to be a seminal, timely, and wholly personal work. With a new introduction by Mollie and fresh, new packaging (including high-end paper, built- to-last binding–plus a lovely hard-cover option) this commemorative edition will be a cornerstone for any cookbook collection that long-time fans and those just discovering Moosewood Cookbook will treasure.

For vegetarians, Mollie Katzen's seminal 1974 cookbook is essentially the bible. Now, four decades after its original hand-written and self-illustrated format, Katzen’s acclaimed collection of recipes is finally getting the proper King James treatment: a glossier commemorative edition with a fancy new introduction, penned by the plant-centric prophet herself. No leather binding, however; that would sort of defeat the point, wouldn’t it?
–Food Republic

Despite the descendants, imitators and pretenders to the throne, the Moosewood Cookbook... remains the undisputed heavyweight champion. The writing style is clear and engaging... the recipes are straightforward and easy to prepare. The food is flavorful, filling and satisfying, even for those who look askance at the idea of a meal that strays from the meat and potatoes model.

There's a reason certain books become classics. It has to do with making an impression. Works of fiction and scholarship do this by changing the way people think and respond to the ideas in the text. In contrast, cookbooks forego the strategy of winning hearts and minds and go straight for the gut. We return to great–or favorite–books over and over again, poring over the words, folding over page corner after page corner, underlining key passages and making marginal notes to reinforce our understanding. It's the same with cookbooks, only with the addition of random ingredient dribbles and sauce stains supplementing our other forms of commemoration. While we occasionally try something new, we always return to our comfort zone, knowing that pretty much everything we need to make one of our favorite recipes is right there on the shelf.
– Bookslut

Among the most influential cookbooks of our time, the Moosewood Cookbook is such a powerful symbol that the publishers were tempted not to tamper with it. But times have changed, and knowledge about the foods we eat and their nutritional value has increased. So, after many inquiries and requests, the author has revised many of her recipes to be lighter and healthier.
– Goodreads

“Mollie Katzen's highly regarded cookbooks feature meatless recipes and fresh produce, and give the feeling of visiting in the kitchen with a warm, witty, well-informed friend. Yet in the millions of kitchens where her tahini-stained books hold a hallowed place on the shelf, Ms. Katzen is the exemplar of a healthful cooking style that has no dogma and offers no apologies."
– The New York Times